The Making of a Slag Pot

In September 2009, while at the National Narrow Gauge Convention in Colorado Springs, Joe Fuss told me that he planned to make a kit of the Silverton Smelter. For this he would need a kit of a slag cart. A what? That was my reaction too. I’d never heard of slag carts. It turns out these look a little like a wheel barrow, and are used to hold slag from the smelter so it can be taken outside, allowed to harden, dumped, and then carted away in a gondola.

Needless to say, I had no idea what they looked like. As luck would have it, I was headed to the Western Museum of Mining & Industry, and they had one on display. I took measurements and drew a sketch of a plan.

The next step was to turn this into parts that could be molded. The first kit will be in HO scale, which is pretty tiny. As usual, I do my original parts “full sized,” meaning that I use the full-sized dimensions. Then I scale to 1:87, or whatever scale, after I’ve gotten all the parts drawn and “assembled” in the computer, like this: 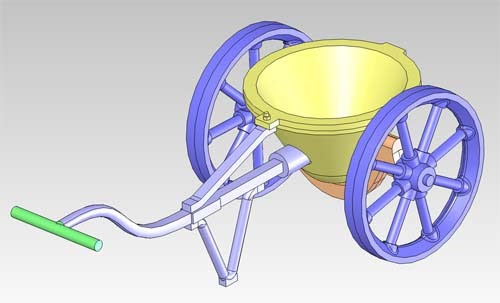 I’ve color-coded the parts so it’s easy to see the different parts that will make up the kit.

Most of these parts are fatter than the real thing. I had to put the kit on a high-fat diet in order to make the parts large enough to mold. Even so, the spokes are just .017” in diameter. The finished model looks delicate.

I laid out the parts, trying to figure out how to fit them all into one mold. I eventually gave up and decided to make two molds—one for the pot and wheels, and the other mold for all the really delicate parts. Below is a test shot from the wheel and pot mold: 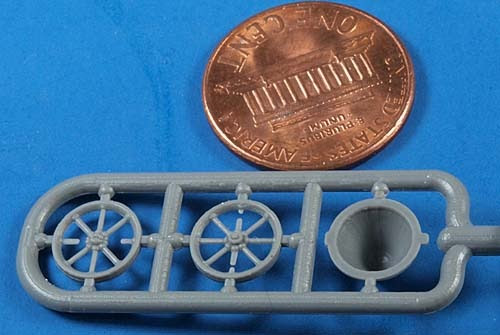 But I still had a problem with the wheels. You can see that two spokes on each wheel didn’t fill completely. I had a heck of a time tracking this down. I reached out for help to Ashley Malcolm at San Juan Car Co. and American Limited Models, as well as members of the Home Injection Molding group on Yahoo. Ashley was the first to reply, saying that my problem was air being trapped and compressed, and several people on the Yahoo group later replied with the same suggestion. So I added some air vents to the mold: 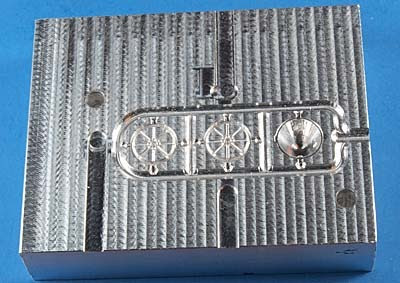 The mold is a little hard to photograph because it’s aluminum. You can see a wide, dark line near the left side of the mold. This is the first air vent I added. There is a small section only .002” deep that connects this vent with the runner on the part, but the main part of the air vent is about .010” thick. The thin section allows air to escape without allowing plastic to flow into the vent.

Adding this vent helped, and most of the spokes filled all the way. But there was one spoke that refused to fill completely, so I added a couple more air vents, but to no avail. In frustration, I decided to look at the mold under a stereo microscope, which I now believe is an indispensible tool for anyone making molds this small. Anyway, when I looked at the wheels, I noticed something peculiar. It looked like some of the spokes were too shallow.

Sure enough, when I went back and look at the tool path, I discovered this: 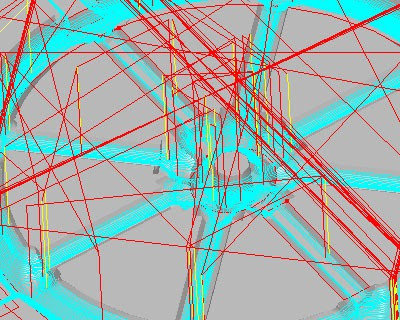 This picture is perhaps a little difficult to read. The spoke to look at is the one that goes from the lower-right to the upper-left. It should be filled in with the cyan-colored lines, which represent where the cutting tool will remove material. However it has a large gap in the middle. This gap meant that this spoke, on both sides of the hub, didn’t get cut very deep. In fact, I ended up with a spoke that was about .008” thick instead of being .017” thick. And that’s why the spokes wouldn’t fill.

I created a new tool path to recut the spokes that weren’t cut properly and then put the mold back in the milling machine. After lot’s of practice, I’ve gotten to the point where I can align the milling head to within about +- .0002” of the same location, which means I can recut even small details like this in the correct place. The final result is a mold that fills perfectly, and at a lower injection pressure. Here is the final result: 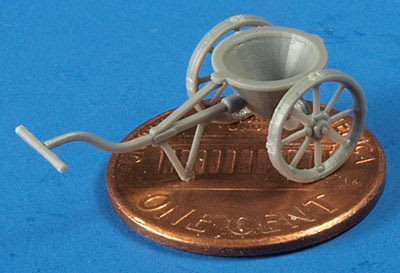 It sure is tiny!