Well, partial success. I made some mistakes, and I need to make some adjustments. But first, the results. As you can see, I now have lids for the tanks, as well as oil cans. 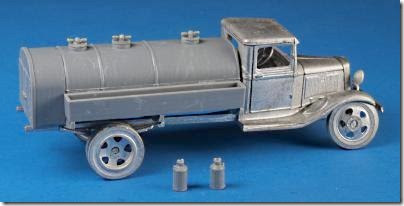 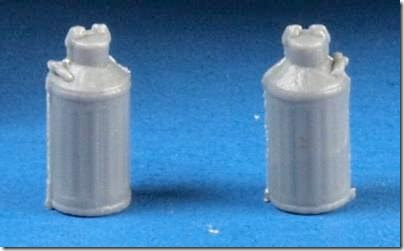 So what are the problems? First, the extra flash is a result of a small mistake I made creating the tool paths. The milling machine ended up making the first pass two large, which results in extra flash and obscuring the fine detail of the two “ears” on the top of the can. I figured out what I’d done wrong after making the test mold. Here is a side-by-side comparison that shows what I cut on the left, and what I should have cut on the right (these images show the simulation of what the mold will look like after a pass with a .015” diameter bull-nose cutter): 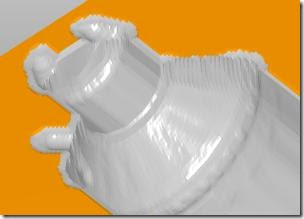 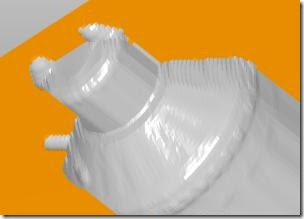 Second, the oil cans are a little bit too large. They don’t quite fit into the troughs. They go about half way down and then stick.

As to the tank lids, the hole I made for the handles is too small, so the handles don’t fit into the hole. I think I’m going to change this so you can use a standard size drill to open up the hole. Getting the holes just the right size with my milling machine is a little tricky because of backlash, which results in holes that aren’t precisely round.

I’m really glad I made a test mold. In fact, given the problems I ran into, I think I’ll make one more test mold of just the tank lids before making the production mold.

Posted by John Socha-Leialoha at 8:58 AM No comments:

I’d forgotten about one part that Ragg wanted me to make for the tank truck add-on kit—namely, 5-gallon oil cans. I had no idea what they looked like back in the 1920s, so I did a quick search on the internet and found a Conoco 5-gallon oil can from the late 1920s (as you can see to the right). Perfect! 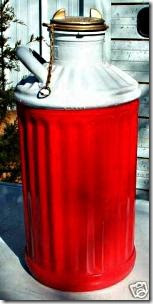 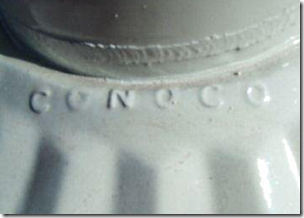 I did some more research and learned that these cans are about 10” in diameter and about 23” tall. With that information I was ready to start drawing the can in the computer. I do all my drawing at prototype size and then scale the model down to S-scale when I’m all done. The first step is to draw a 10” diameter circle, and then extrude the circle into a cylinder (left-most picture): 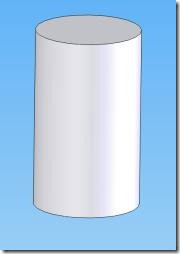 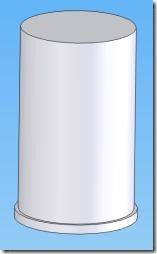 Next I added a slightly larger diameter circle on the bottom and extruded it up (middle picture above). Finally, I added some fillets to make the bottom look more like the can above.

Next I repeated the same operation near the top (left picture below). Then I added a truncated cone (middle picture) and the neck of the can (right picture below): 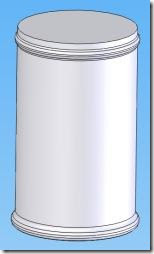 As you can see, building a model in the computer is a series of operations that either add or remove material. Most of the steps so far have been adding material, but the fillet operations knock off the sharp edges, so they’re actually removing some material.

The final steps are pretty simple. I made the top slightly domed, and then added the two “ears” that make it easier to unscrew the lid of the can:

The picture in the middle above shows the can after I added some small depressions like the ones on the prototype. These are fairly subtle, so I’m not sure how well they’ll show up on a model that is only about 1/4” tall. Also, the handle that I’ve added is actually solid, as you can see in the right-most picture. But again, since this is only about .01” thick, I’m not sure that will really be noticeable.

Ragg suggested that I not include the handle at all, but I wanted to try. The production mold will include some number of oil cans (I’m not sure how many just yet), as well as three sets of lids for the gas tank on the truck. I have some questions about how well these parts are going to turn out, so I’ve decided to make a test mold that includes just one of each part. I’ll probably start making that mold tomorrow, and with any luck will have test parts before the end of the day. We’ll see how the corrugations and the handle turn out.

Posted by John Socha-Leialoha at 7:32 PM No comments:

Then an idea struck me last night. Since I’m only making a small number of these, all I really need is the ejector pin and nothing else. I have some 1/4” K&S brass rod that I measured and came out to precisely .250 inches. Plus I have a little bench-top cut-off saw I got from Harbor Freight with a 2” diameter blade. So, first it was back to SolidWorks to add a hole in the middle of the mold, and then back to the milling machine to add this hole.

Holes cut by a milling machine or a drill usually aren’t completely smooth, so I use a reamer from and over/under set. These are reamers that are either .001” over or under the target size. Using the over 1/4” reamer makes the hold nice and smooth, and the rod will slide easily, but still with a tight fit so plastic won’t work it’s way between the rod and the hole.

I carefully put the rod into the mold so it’s flush with the back, and the put the mold into the machine. Once I’ve injected the plastic, I pull the mold out of the machine, put it upside down between two blocks, and then tap with a hammer on another piece of rod: 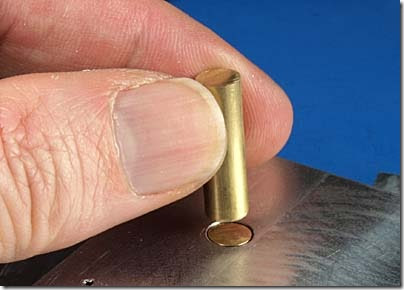 It worked like a charm! Below you can see the end glued onto the tank truck, along with a casting still attached to the sprue: 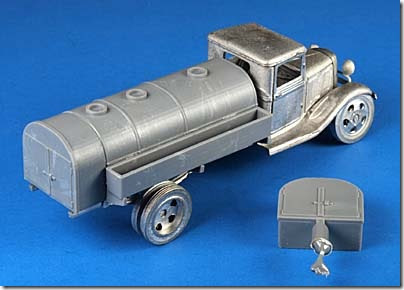 Now I only have two more molds to make: the tank bottom, and a mold for the tank covers. Both of these will be straight-forward to make, so I’m getting to the home stretch.