Cutter compensation is a great way to dial in a hole to be a very precise size. I learned about cutter compensation from a John Saunders video How to Use Cutter Comp on a Tormach! WW180. In his video, he's using PathPilot on a Tormach. But I have Mach3 with a Taig, so the workflow is a little different. But not by much.

First, some background. Cutter compensation is done use a set of g codes: G41 and G42. Which one to use depends on the direction of cut. Fortunately, Fusion 360 handles choosing the correct one based on what you're trying to do.

Here's the high-level overview of how it works. Normally, Fusion 360 will calculate the correct location of the tool path based on the diameter of the cutter. In the picture below, you can see that it's moved the tool path for the cutter inward by half of the tool diameter. 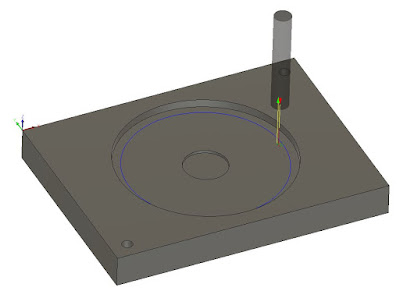 In other words, Fusion 360 is handling the calculations to compensate for the diameter of the cutter.

Cutter compensation in Fusion 360, at least at the time I'm writing this, is only supported for 2D operations.

If you change the default In computer to In control, you're telling Fusion 360 that the controller (Mach3 in my case) will handle compensation instead. Here is how you make that change: 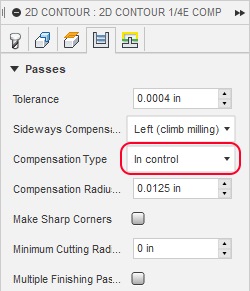 Once you regenerate the tool path, you'll see the following: 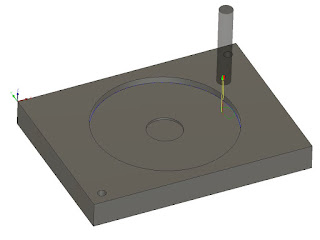 This may be a little hard to see, but now the tool path (the blue line) is exactly along the profile, rather than 1/2 a diameter away.

Mach3 has a tool table. I have never used this before, which means I've always been using tool 1. To set a tool diameter in this table: 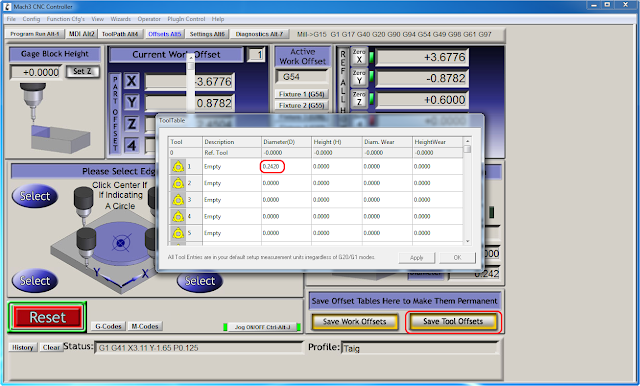 You might think you're done, and ready to make small changes to the diameter (making it slightly smaller to make the hole larger). But that's not the case. Fusion 360's post processor for Mach3 emits g code that looks something like this:

Notice the P0.125 at the end of the line that contains G41. This tells Mach3 to use this tool radius instead of the value in the tool table, so you have to remove this. Additionally, I found comments that Mach3 doesn't like having G41 on the same line as other commands. So, I edited the g code so the above appears like this:

Once I made those changes, I was able to slowly change the diameter of the cutter in the Mach3 tool table until I had the hole just the right size. I started with 0.25 and then worked my way down to .244 (I made the hole in CAD slightly smaller than my target).
Posted by John Socha-Leialoha at 2:15 PM