Today we had a Railroad Prototype Modelers meet here in the Seattle area, so of course I wanted to see how far I could get with my caboose kit. I made a mold for all four the the cupola walls and here is what I got: 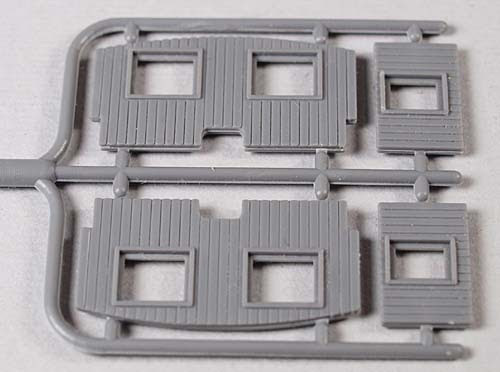 In other words, it turned out great. Well, sort of. It took me several tries to get tries to get a good shot. Most of the shots were either short or blew the mold apart, resulting in a blob of plastic. Here is what a short shot looks like (on the left) and a “blown” shot (on the right): 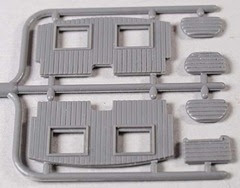 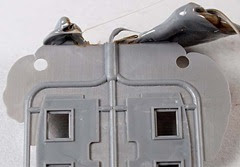 As you see on the left, the plastic didn’t complete fill the end walls. Fortunately, at the RPM meet, I ran into Dave Hussey, who is the owner of Cannon & Company, and he gave me two suggestions, which together completely solved my problem. Here is what he suggested:

I had been using a melt temperature of 460 F for most of my work so far. Dave mentioned that he goes up to 600 F for some of his molds. Since the polystyrene flows easier at higher temperatures, the theory is that I should be able to use a slightly lower injection pressure and fill the mold. I cut the vent slot, as you can see here: 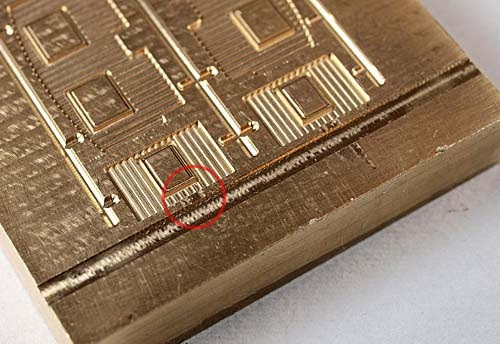 There is a vent slot that goes from one side to another. This slot is about 1/8” wide and about .015” deep. Next to each window of an end wall, I cut a 1/8” wide slot about .0005” deep (I’ve circled one). These vents are shallow enough to keep plastic from flowing into them, while still allowing air to escape.

I next increased the melt temperature a little at a time. At about 530 F, and with a slightly lower injection pressure, I was able to fill the mold every time with absolutely no flash!

Thanks to Dave and the wonderful sharing at RPM meets, I can declare success for this mold and move onto the next mold. I’ve decided to tackle the curved roof the the cupola next, which will present a new set of challenges. Once again, Dave had some suggestions that I’m going to try. The next RPM meet is on November 10 and is part of the Trains 2012 Model Railway Exhibition in Burnaby, BC, about a 3-hour drive away from here. We’ll see how far I get for that RPM meet.

Posted by John Socha-Leialoha at 10:07 PM