It’s been a long time since my last blog post.

I’ve made almost all my parts for Ragg’s…To Riches?, which is now winding down. As a result, I’m taking time to work on a project for myself. My plan is to model the RGS in HOn3. So far I’ve built a few models, including a short caboose. And for some time I’ve been wanting to build a model of the RGS caboose 0409. This caboose is a little shorter and wider than most short cabooses. As far as I know, there are no kits made for this caboose, so I had two choices: either scratch build one, or design an injection molded kit. So, of course, I decided to try making an injection molded kit (even there’s no market for one).

I’ve been working on the 3-D model for the kit, and here is what I have so far: 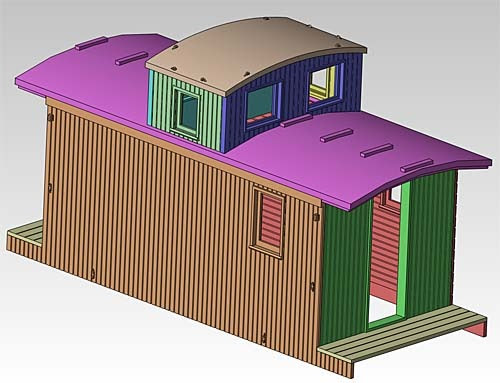 The siding is tongue and groove with scale 1/2” wide gaps. I made these gaps triangular and I was curious to see how they would turn out when scaled down to HO scale (1:87). At this scale, the gaps would be just shy of .006”, which is pretty tiny. The sides of the cupola, which is shown in light green in this drawing (each part is shown in a different color), are very small, so they were a good candidate for a test mold. I made the test mold out of brass, and here is the first part out of the mold: 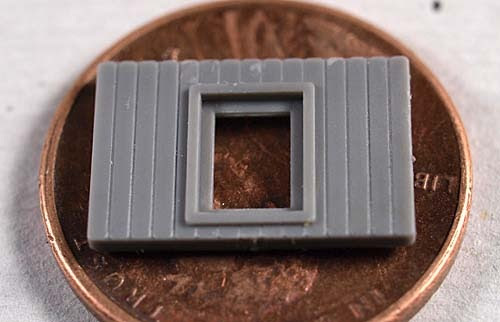 As you can see, this is a very close blow-up. Some of the slots aren’t as deep as other slots because my Taig CNC mill isn’t as precise as I’d like (it doesn’t have a ball screw). As a result, some of the ridges in the mold (that represent the gaps in the molded part), were shaved off more than others. I’d really like to know why. Even so, the results look just fine!

My next step will be to make a mold for all four of the cupola sides and built up a cupola.

Posted by John Socha-Leialoha at 10:13 PM